Just because it's legal, doesn't mean it's a good idea...

April Cachia had been a firefighter for just five days when she was despatched from Shoreditch fire station to Grenfell Tower on 14th June. In a Daily Telegraph article she described arriving at the scene “There were lots of people screaming in the streets that their family are inside, that they can’t find them, that people are missing, they want help,”

Miss Cachia’s crew were told that the stairwell was too narrow for more fire fighters to come in wearing the full breathing apparatus suits, so they were given the option of helping survivors outside the building, or going inside with just with eye gear to help residents flee to safety.

Grenfell Tower was provided with just one staircase; each flight was 1.1m wide. Here is a video of that staircase now:

Residents in Grenfell Tower warned repeatedly of the danger that a single staircase was their only means of escaping the building, but extraordinary as it may seem, under current Building Regulations this arrangement is legal. Great Arthur House, built in 1955, has two staircases; giving additional space to evacuate the building and alternative means of escape if one staircase is blocked. In order to accommodate the maximum number of units the new proposed CoLPAI tower in Golden Lane has just one staircase. 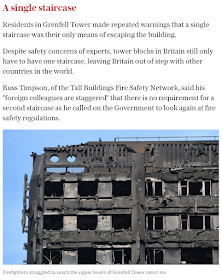 Here are the plans of Grenfell House and of the proposed new tower on the RCS site. The single staircase proposed for all 66 flats in the Golden Lane tower is just 1.2m wide. Riser cupboards, carrying all the electrical, mechanical services rise through the landings just as at Grenfell. One of the criticisms of that design is that, over time and with maintenance and alterations, the fire safety of the riser cupboards becomes compromised. One of the concerns of Grenfell residents was that new pipes had been installed, and then left unboxed. Good design would anticipate these future maintenance problems and keep services and people separated. 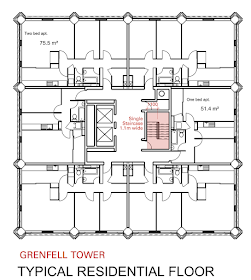 You may be shocked that this single staircase design is being brought forward at a time when the risks of single staircase buildings are being hotly debated. But this isn't the only Fire Safety compromise in the new design. Due to the over development of the site, there is insufficient room for bicycle storage in the ground floor bike store. So residents of the new block are expected to store bicycles on the common access corridors. Unfortunately where there is one bicycle, there tend to be two or more and buggy parking. At the other end of the borough Islington is so concerned about this that it has given all its residents 24 hours to remove them: 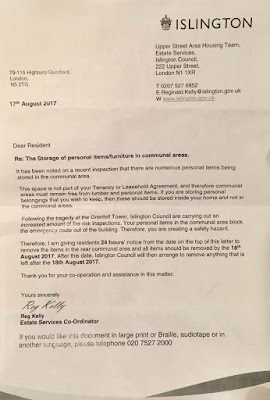 At the end of the line

The plans of the new tower show external corridors to access the flats. "Deck Access". Many of us have lived in these kind of flats - although at the original Golden Lane flats, the clever design means that you don't actually pass by other people's bedrooms on the way to your front door. We asked the designers what the implications were for safety - what if you live at the end of one of the external corridors and there was a fire in the flat adjacent to the stairwell. How would you pass by it to get to the safety of the staircase?

The answer, you may be surprised to hear, is that you have to crawl under the windows of the burning flat on your hands and knees to avoid smoke and flames. What if the flat below you is on fire? What if you are disabled? Perhaps better not ask.

It's no better inside the flats. Internally there is no door to the kitchen, so if a fire starts there in the night, smoke will fill the corridor leading from the bedroom to the front door.

Just as at other high rise towers, the developers have sought a "fire engineered" solution to mitigate the risks from all these compromises and no doubt they will contend that their design satisfies building regulations. But as it says in 1 Corinthians 6:12, "All things are lawful unto me, but all things are not expedient", or in other words, Just because it's legal, doesn't mean its a good idea.

You can make your comments on the CoLPAI Tower proposals to Islington here and the City of London here. Comments must be in soon.
GLERA at 09:26
Share